DESCRIPTION
time run the program COMMAND with any given arguments ARG…. When
COMMAND finishes, time displays information about resources used by
COMMAND (on the standard error output, by default). If COMMAND exits
with non-zero status, time displays a warning message and the exit
status.

time determines which information to display about the resources used
by the COMMAND from the string FORMAT. If no format is specified on
the command line, but the TIME environment variable is set, its value
is used as the format. Otherwise, a default format built into time is
used.

OPTIONS
-o FILE, –output=FILE
Write the resource use statistics to FILE instead of to the
standard error stream. By default, this overwrites the file,
destroying the file’s previous contents. This option is useful
for collecting information on interactive programs and programs
that produce output on the standard error stream.

-a, –append
Append the resource use information to the output file instead
of overwriting it. This option is only useful with the `-o‘ or
`–output‘ option.

-f FORMAT, –format FORMAT
Use FORMAT as the format string that controls the output of
time. See the below more information.

–help Print a summary of the command line options and exit.

-v, –verbose
Use the built-in verbose format, which displays each available
piece of information on the program’s resource use on its own
line, with an English description of its meaning.

–quiet
Do not report the status of the program even if it is different
from zero.

-V, –version
Print the version number of time and exit.

FORMATTING THE OUTPUT
The format string FORMAT controls the contents of the time output. The
format string can be set using the `-f‘ or `–format‘, `-v‘ or
`–verbose‘, or `-p‘ or `–portability‘ options. If they are not
given, but the TIME environment variable is set, its value is used as
the format string. Otherwise, a built-in default format is used. The
default format is:
%Uuser %Ssystem %Eelapsed %PCPU (%Xtext+%Ddata %Mmax)k
%Iinputs+%Ooutputs (%Fmajor+%Rminor)pagefaults %Wswaps

The format string usually consists of `resource specifiers‘
interspersed with plain text. A percent sign (`%‘) in the format
string causes the following character to be interpreted as a resource
specifier, which is similar to the formatting characters in the
printf(3) function.

Other text in the format string is copied verbatim to the output. time
always prints a newline after printing the resource use information, so
normally format strings do not end with a newline character (or `\n‘).

There are many resource specifications. Not all resources are measured
by all versions of Unix, so some of the values might be reported as
zero. Any character following a percent sign that is not listed in the
table below causes a question mark (`?‘) to be output, followed by that
character, to indicate that an invalid resource specifier was given.

Users of the bash shell need to use an explicit path in order to run
the external time command and not the shell builtin variant. On system
where time is installed in /usr/bin, the first example would become
/usr/bin/time wc /etc/hosts

ACCURACY
The elapsed time is not collected atomically with the execution of the
program; as a result, in bizarre circumstances (if the time command
gets stopped or swapped out in between when the program being timed
exits and when time calculates how long it took to run), it could be
much larger than the actual execution time.

When the running time of a command is very nearly zero, some values
(e.g., the percentage of CPU used) may be reported as either zero
(which is wrong) or a question mark.

Most information shown by time is derived from the wait3(2) system
call. The numbers are only as good as those returned by wait3(2). On
systems that do not have a wait3(2) call that returns status
information, the times(2) system call is used instead. However, it
provides much less information than wait3(2), so on those systems time
reports the majority of the resources as zero.

The `%I‘ and `%O‘ values are allegedly only `real‘ input and output and
do not include those supplied by caching devices. The meaning of
`real‘ I/O reported by `%I‘ and `%O‘ may be muddled for workstations,
especially diskless ones. 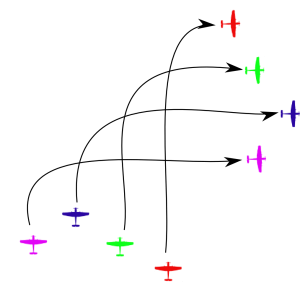